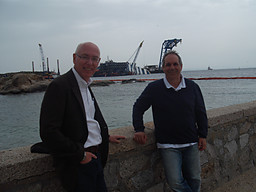 “Marina’s family lived here since the XVI century, for 500 hundred years, when Cosimo I de’ Medici colonized the island ravaged by pirates. The main question to her is: when you get a disaster like the Costia Concordia, do you think the disaster changed the island completely? in what way? “There are two aspects, one is economical, the other is psychological. Tourism is the main economical support for the island. Last year there was a huge decrease on the number of tourists, and therefore a huge decrease in income for the island. The other aspect concerns the psychological influence on all the residents: it’s a sad presence, a huge boat, you can’t avoid thinking at all the people who died and suffered so much. This has a negative psychological impact on the local community, there is a lot of depression, a lot of uncertainty due to the outcome of the move, we all question whether this reck will be removed and taken away or it will be here forever… There is a general rumor among the Giglio residents about the history of pirates’ invasions: people here compare the last incursion of the pirates in 1799, when the locals found refuge within the high castle walls, and the actual Costa Concordia’s situation. Actually, we all think this “invasion” is worse“.

Al minuto 20.5 Marina continua:
“No one has ever attempted to pull the boat upright, it is very dangerous, this is a big concern for Marina Aldi. “Because the ship still contains oil, chemicals, dangerous a/c substances, we all trust that if the boat is transported away then we will be fine. There is faith on the island and hope that the 400 salvage workers are doing the best they can in an operation that will be able to tow the boat away.”

“What do you think about the cruise ships sailing and cruising the Mediterranean Sea? “This cruising industry is booming, I read their figures, they are incredible. The Mediterranean sea is a small sea, it is just simply too small and too vulnerable for these new bigger cruise ships. This type of shipping cruises is completely wrong: if you look at one of these boats they can be compared to a full floating city, they are huge. We are very nervous when we see they don’t respect the laws and they follow wrong sea routes. The most impressive and negative example is in Venice, they arrive so close to Piazza San Marco, like a normal tourist. Italia Nostra would like to see the cruising industry significantly curtailed, smaller ships in the Mediterranean, big ships should be sticking to the rules that are properly set, and they shouldn’t be really sailing in the fragile heart of Venice or within meters of lovely little islands like Giglio.”

Marina continua: “Large boats should be guests of larger harbors like Civitavecchia, Livorno, where they can be all serviced and receive what they need, there is no need to come close to the islands, it’s very dangerous. Praticamente e’ come se tu non fossi nemmeno in mare quando sei su queste grandi navi da crociera“.